Located in the valley of West Germany’s Ammer River and among the Ammergau Alps, lies the picturesque village of Oberammergau, Germany.

Located in the valley of West Germany’s Ammer River and among the Ammergau Alps, lies the picturesque village of Oberammergau, Germany. It is a Bavarian village famous for its skilled wood-carvers and “Luftmalerei”, the colorful frescoes decorating the walls of nearly every one of the town’s low-roofed chalets, with whimsical scenes from well-known fairy tales and such religious themes as the Holy Family’s flight into Egypt and the Assumption of the Blessed Virgin. In keeping with the village’s pristine surroundings and vast history, Oberammergau is most famous for its Passion Play, the stirring, world-renowned drama that has, for almost four centuries, commemorated Christ’s last days on earth.

The events leading to this world-famous performance began in 1633, when the bubonic plague, known also as the “Black Death,” was raging throughout Europe. One-hundred 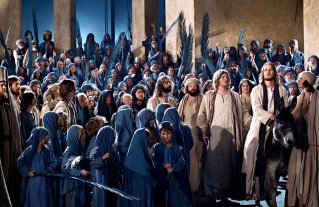 citizens of Oberammergau died in the epidemic, and in affect of their deaths, the village elders vowed to enact the Passion of Christ every ten years until the end of time, if God would spare the town’s remaining residents. From that hour, there were no more plague deaths in Oberammergau and a tradition was born. The Passion Play was first performed in 1634, and in 1780, the performance was moved to the first year of every decade. Since then, the play has been continuously presented in 10-year intervals, with the exceptions of the 1870 and 1940 performances that were prevented by the French-Prussian War and World War II. Even still, the people of Oberammergau have kept their promise even as they prepare to perform their 42nd play, the upcoming Passion Play of 2020.

The Passion Play has not always been performed on an open-air stage with thousands of seats, it was actually first performed in the town’s cemetery, on top of the fresh graves of the plague victims. This stage was little more than a simple wooden construction that has 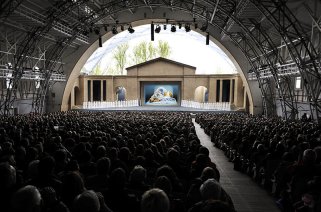 since been updated and completely moved. The stage was relocated to the northern edge of the town and expanded to house up to 4,5000 spectators in 1830. In 1890, the stage was renovated to put the seats and stage under a roof for a more pleasant viewing experience. In 1930, the shape and construction of today’s auditorium took hold and its open air design was introduced. Then in 2000 the theater was renovated and given a whole new facade. The theater sits around 4500 people and has comfortable seats on a slope so that every audience member has a great view.

The Passion Play follows Christ from his triumphant entry into Jerusalem through his Trial, Crucifixion, Resurrection, and Ascension. Actors and actresses are cast on the basis of good morals and character, rather than sheer acting talent. Participants who were not born in Oberammergau must have lived there for at least 20 years to be in the play. Because some of the roles are especially demanding, particularly the role of Jesus which requires the actor to hang on the Cross for 20 agonizing minutes, two actors alternate performances for each of the plays major roles.

Twenty-five “living pictures” of scenes from the Old Testament are interspersed throughout the play, and about 2,000 of Oberammergau’s villagers take part in the day-long, 16 act production. The play, which includes over 120 speaking roles, and is accompanied by a 65+ member orchestra and 48+ voice chorus, also requires the services of hundreds of stagehands, seamstresses, firemen, first-aid assistants, and a number of auditorium, cloakroom, and box office attendants. The Oberammergau Passion Play is preformed 5-days-a-week from May until October. No performance is ever canceled due to weather conditions, as the seating area is covered and can sit up to 4,500 spectators.

It is estimated in 2020 that around 450,000 spectators from all over the world will come

to Oberammergau to experience this unique and timeless production and about 50% of them will be English-speaking. There will be around 102 performances with the first being on May 16th and the last one being on October 4th. This year will make the 42nd Passion Play to take place and it will have been running for more than 380 years. This makes this play the largest and most famous passion play there is!

The Passion of Jesus 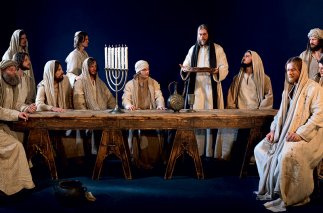 of Gethsemane to his arrest, trial, journey to Calvary, and crucifixion. It is sometimes extended to include the Last Supper. Likewise, all of these events portrayed in the play occurred in Jerusalem, although there has been much dispute among religious scholars as to the exact date and site of said events.

The Garden of Gethsemane

After the last Passover supper, Jesus went to the Mount of Olives with the apostles Peter, James and John, and continued to the nearby Garden of Gethsemane. This is the site where Jesus prayed in despair, fully aware of the sufferings he was about to endure. Upon leaving the garden, Judas appeared with chief priests, greeting Jesus with a kiss. The kiss was a sign meant to inform the priests which man they had come to arrest. The Mount of Olives was originally beyond the city and Kidron Valley. Traditionally, the accepted site of the Garden of Gethsemane is an olive grove on the western slopes.

The Roman Governor, Pontius Pilate, took Jesus to his trial. Pilate questioned Jesus and, although it was clear that he had committed no crime against Rome, reluctantly condemned Jesus to death to satisfy the priests and the rabble. The traditional site of the trial is the fortress by the Temple Mount, situated near the Ecce Homo (“Behold the Man”) arch, where Pilate is believed to have shown Jesus to the crowd. However, many religious scholars now think that Jesus could have been tried by Pilate at his headquarters in Herod’s Palace, on the northwest side of Jerusalem.

The Roman soldiers whipped and mocked Jesus and adorned his head with a crown of thorns. He was then taken to the place of crucifixion—the Hill of Calvary or Golgotha—

where he was nailed to the cross and left to die in agony, along with two other criminals who were being punished similarly. Traditionally, the route to Calvary is known as the Via Dolorosa; however, if the scholars who believe Jesus was tried in Herod’s Palace are accurate, the Via Dolorosa would not have been the actual route traveled by Jesus. Nonetheless, there is general agreement that the site of Calvary and Jesus’ burial was where the Church of the Holy Sepulcher now stands.

More of the World for Less

Gate 1 has provided quality, affordable escorted tours, river cruises and vacation packages for 40 years. We look forward to showing you More of the World for Less on your next vacation.