Unravel the Mysteries of Russia with Gate 1 Travel

British Prime Minister Winston Churchill called Russia “a riddle wrapped in a mystery inside an enigma.” Of course, that was at the dawn of the Cold War, when the nation operated behind a tightly closed door. Fast forward to 2016, and travelers are visiting this culture-rich country in droves. And that’s a heartening trend for us here at Gate 1 Travel. Russia may still exude an enigmatic side, but we love nothing more than seeing our travelers unwrap some of its mysteries, whether they’re exploring this fascinating country with us by land during our Russia escorted tours or by river during one of our leisurely and eye-opening Russian river cruises.

Moscow: Steeped in the Past, Poised for the Future 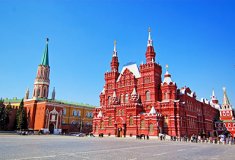 When most people think of Russia, the imposing red walls of Moscow’s Kremlin come to mind. Once a symbol of intimidation and might, today’s Kremlin is a bastion of history and culture that invites endless exploration. Inside are priceless vestiges of a czarist heritage, an unrivalled collection of architecture and art. Cathedral Square, surrounded by a stunning trio of cathedrals, is where all the streets of the Kremlin once converged. Here, countless gilded onion domes gleam in the sunlight. The setting still commands awe and reverence and remains a testament to Russian Orthodoxy. Nearby, the Kremlin Armory harkens back to imperial days, a breathtaking collection of royal crowns, embossed carriages and the world-famous collection of Faberge eggs.

Remarkable as it is, Cathedral Square is often overshadowed by that other wide-open space just outside the Kremlin: the vast Red Square is the center of culture in today’s Moscow. Its most recognized landmark is St. Basil’s Cathedral, a soaring and flamboyant demonstration of vibrant color and architectural brilliance. Its nine onion domes pose a striking profile.

In Moscow, even shopping takes on a palatial air at the GUM department store, a stunning mall of shops covered with a glass roof. If you prefer shopping outdoors Arbat Street boasts boutiques and cafes where artisans display their wares and Muscovites linger over Russian tea.

Art lovers, too, find many opportunities to admire some of the world’s finest works while in Moscow, whether in the city’s Tretyakovsky Gallery—home to 150,000 pieces that span the centuries—or underground in the metro, whose stations are famously decorated in marble, mosaics, chandeliers and statuary.

When Peter the Great ordered the construction of his northern city, he envisioned a bright and gilded capital that would rival Europe’s cultural capitals, lined with canals, beautiful bridges and rich cultural institutions. St. Petersburg is all of this, and is often called Russia’s most “Western” city because of it. During your stay, you’ll see the magnificent St. Isaac’s Cathedral and the Bronze Horseman—Peter himself—standing out front. Admire the neoclassical Mariinsky Palace, the last of its style to be built in the city. Another palace, the Yusopov, is enshrined in mystery. It is here that, according to some, Prince Yusopov and some co-conspirators murdered the faith healer Grigori Rasputin after the prince grew concerned about the influence the mystic carried with the czar.

The grand centerpiece of St. Petersburg is the Winter Palace, part of the city’s expansive Hermitage Museum. During her reign, Catherine the Great, known as a great patron of the arts, acquired one of the world’s largest private collections in her palace. After her death, the city ensured that her beloved art be shared by opening the doors of the Winter Palace as the Hermitage Museum in 1852. More than six million pieces are held by the museum, with only a fraction on display, including masterpieces by Michelangelo, Picasso, Rembrandt, Monet and countless others.

To see where St. Petersburg started, visit the Peter and Paul Fortress. This was the first structure raised in the city, intended to keep interlopers away as Peter built his metropolis. Today, many Russian czars are entombed here. The spectacular Church of the Savior on Spilled Blood is dedicated to one of them, Alexander II. This splendid church was constructed as a shrine to him after he was mortally wounded on the site. It is a stunning example of Russian Romantic Nationalist architecture and stands out for its extravagance and rich decoration.

Cruise deep into Russia’s Heart during a Thrilling River Cruise

A remarkable and culture-rich network of canals, lakes and rivers connects Moscow and St. Petersburg, and you can explore them during Gate 1’s river cruises. These rewarding journeys explore the heart of rural Russia, calling on lesser visited towns and cities where smiling baboushkas sell colorful nesting dolls, gilded onion domes peer out from behind forested shores and magnificent wooden architecture dots the landscape. The beauty of exploring Russia by river ship is the leisurely pace you’ll enjoy: Unpack your bags once after you embark, then let the cultural and historic wonders come to you. What’s more, you’ll travel aboard a ship that we’ve hand-selected for your comfort and enjoy the service of an attentive staff.

In Lake Ladoga, the island village of Mandrogi clings to rugged shores. Part of the Valaam archipelago, this reconstructed 18th-century traditional village harkens back to simpler times when houses, or izba, were constructed from locally felled trees (which, as you’ll see, are in abundance!). You’ll witness a rich tradition of wood carving, lacework and pottery during your visit. Locals even made their own vodka, as you’ll see during a visit to the Museum of Russian Vodka. The region’s other major lake, Onega, is home to another treasure trove of wooden architecture. Kizhi Island is an open-air museum and UNESCO World Heritage Site, comprising more than 80 structures, including the Church of the Transfiguration, built without a single nail.

The 14th-century monastery of Kirillo-Belozersky in Goritsy was once northern Russia’s largest. Though it may appear to lie in the middle of nowhere along the Volga-Baltic Waterway, it is one of the nation’s most important and historic religious sites. Within its 22-foot-thick walls, eleven churches date to the 16th century, when the monastery was the second richest land owner in Russia. It is a fascinating spot brimming with history.

Two other cities are worth a stop along the Volga River. Yaroslavl is one of Russia’s Golden Ring cities for the role it has played in Russia’s eventful history. With a strategic locale on the river, it grew into a major trade center. The 800-year-old Transfiguration of the Savior Monastery and its impressive Cathedral comprise the oldest structures in the city. But the Church of Elijah the Prophet, with its finely wrought frescoes and icons, and the Church of St. Nicholas the Wonder Worker are both central to the city’s religious past. Uglich, also on the Volga, is most famous as a place of hiding as this is where Prince Dmitry came to escape the wrath of his father, Ivan the Terrible. Alas, Dmitry was found by Ivan’s forces and murdered on the spot where the blue-domed Church of St. Dmitry-on-Blood now stands.

Explore More of this Enriching Region 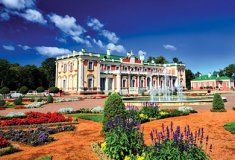 Gate 1 Travel lets you combine your exploration with a visit to four delightful Baltic nations whose histories are intertwined with Mother Russia. Visit the Estonian capital of Tallinn, beautifully set on the Gulf of Finland and rich in medieval splendor. The nearby splendid Kadriorg Palace was built by Peter the Great for Catherine I. The Latvian capital of Riga, at the mouth of the Dougava River as it spills into the Gulf of Riga, is a stunning collection of architecture that dates back to the Romanesque period and spans all the way to early 20th-century Art Nouveau. In the Lithuanian capital of Vilnius, explore what many call the “Jerusalem of Lithuania” for its rich Jewish heritage. And in Poland, tour the breathtaking capital, Warsaw; its historic quarter was painstakingly rebuilt after its complete destruction in World War II. All four of these capitals boast remarkably preserved Old Towns that have been declared UNESCO World Heritage Sites for their authenticity and cultural importance.

You already know that Gate 1 Travel gives you more of the world for less. Our strong presence in Russia ensures that we can arrange a rich array of features at a value that’s sure to surprise you. What’s more, we never compromise on quality. Because we know Russia so well and have been bringing travelers here for so long, you’ll enjoy the best available hotels and river ships. Plus, you’ll take in all the nuances and rich traditions of the region with help from our exemplary and insightful English-speaking Tour Managers.

We invite you to join Gate 1 in Russia, and unravel its mysteries for yourself!

More of the World for Less

Gate 1 has provided quality, affordable escorted tours, river cruises and vacation packages for over 30 years. We look forward to showing you More of the World for Less on your next vacation.